Plug-In Hybrid 125-225MPGe Vehicle in CAD You can build it from plans!

Category: PLANS AND MANUALS Tags: 125-225MPGe, Hybrid, in CAD, Plug-In, Riley XR3, Vehicle, You can build it from plans!

The XR3 Personal Transit Vehicle (PTV) is a super-fuel-efficient two-passenger plug-in hybrid that achieves 125 mpg on diesel power alone, 225 mpg equivalent when diesel and electric power are used in series, and performance like a conventional automobile.

The design of the XR3 Hybrid is based on existing technologies and a vehicle personality that makes conserving energy a fun driving experience. It showcases the design ideas explored in Robert Q. Riley’s book, Alternative Cars in the 21st Century.

XR3 on “Looper” set in New OrleansAt just 1480 pounds, this high-performance design combines fast acceleration, a maximum speed of 80 mph, and fuel economy of 125- to over 200-mpg.   You can set it up as a diesel-powered vehicle and get up to 125 mpg.  As a hybrid, fuel economy can excede 200 mpg.  And as a pure battery-electric vehicle, it can run 40 to 100 miles on a single charge, depending on the number of batteries.

Its clam-shell canopy and three-wheel platform boldly differentiates the XR3 from conventional passenger cars. The vehicle’s hybrid power system, diesel engine, and low curb weight are the main ingredients of its super-high fuel economy and excellent performance. Acceleration equal to that of a conventional car and a maximum speed of 80 mph make the XR3 Hybrid equally at home on freeways and surface streets.

XR3 cruising neighborhood on battery powerPlans enable people with common building skills to build a duplicate of the XR3 Hybrid prototype. Or using the technical information in the construction manual, readers will understand the factors that influence fuel economy, and learn how to make any car achieve greater fuel economy. The XR3 Hybrid gives enthusiasts and experimenters the opportunity to significantly reduce their transportation expenses and have fun doing it.

Get Started When set up as a hybrid, the XR3 is a plug-in hybrid.  This makes it possible to drive on battery power alone on trips of about 40 miles (100 miles when built as a pure battery-electric vehicle with additional batteries installed in place of the engine and transmisison). And when both the diesel and the battery-electric systems are used in series, fuel economy increases to over 200-mpg(e).

A plug-in hybrid simply means that part or all of the vehicle’s energy is taken from the grid system where it is cleaner and less costly to produce. Most of the world’s automakers are now working on plug-in hybrids.

The plug-in architecture also allows much greater flexibility in power system choices. With a mild hybrid, like the Honda Insight and the Toyota Prius, proper control of the power system depends on having known operating characteristics of the subsystems – the internal combustion engine (ICE) and electric systems. Subsystems are selected in advance and controlled by a computer. The computer, however, can properly manage integration of subsystems only when the output characteristics of the two systems are predefined and fixed. Any modification in either of the power systems (electric or ICE) can cause the control system to operate incorrectly.

In the hybrid operating mode, the XR3 has lots of burst power for quick acceleration. If you were to use this acceleration potential to its fullest, fuel economy will be reduced. Fuel economy will also vary according the particular components chosen for the power system. Performance figures quoted here are for a conservatively-driven vehicle having a system configured just like the prototype. Plans provide the information necessary for selecting different components in order to modify the vehicle’s performance characteristics.  Builders, however, are free to install a different engine or electric motor without affect the way the two systems work togther, or they can just install one system or the other system.

Figure about 500 – 650 hours of build time, depending on your skill level and which version you build (diesel-only, battery-electric, or hybrid).  Much of the time is in building the body.  The simple chassis goes quickly.    Construction costs are also variable because of the many choices individual builders might make. It’s a modular design that lets builders make choices according to their budget and performance goals. More than half the cost of parts for the XR3 prototype went to the electric propulsion system.  This is typical of electric vehicles.

At the upper end, a duplicate of our Li-Ion-powered prototype will top $25,000. If you switch to lead-acid batteries, you can save as much as $5,000, but you’ll have to forego the performance of advanced batteries. At the bottom end of the scale, a diesel-only vehicle capable of achieving 125-mpg can be built for less than $10,000. The modularity of the design allows you to begin with a diesel-only vehicle then add the electric power train components later on.

Similar options exist with a battery-only vehicle. One can simply leave off the combustion power system, install more batteries in the extra space up front, and end up with a BEV capable of driving 100 miles on a charge. Li-ion batteries can be recharged in about two-hours (or less, depending on the charger and line capacity).   A full recharge of lead-acid batteries normally takes 6 to 8 hours.  With enough line-capacity, however, a Li-Ion battery pack can be brought to about 80 percent charge in less than one hour.  But these rapid charge levels degrade the life of the battery pack.

These cost-related choices also affect the performance of the vehicle. For example, leaving off the electric propulsion system reduces vehicle weight from about 1500 pounds (682 kg) to approximately 950 pounds (432 kg). This improves diesel-only fuel economy and acceleration.

Plans come in three versions, all done in CAD  The order form automatically calculates the shipping charge based on weight and destination.  Click on the images to the left to get details on the contents.  The Standard Plan-Set consists of conventional printed plans and a 149-page bound manual.   The Deluxe Plan-Set includes everything in the Standard Plan-Set, plus three discs.  The discs contain a one-hour video of the XR3 being built and lots of helpful electronic files.  Files include 3D CAD models that can be viewed on your computer, plus conventional drawings. The manual is also on disc, and runs in a web browser with click to enlarge color images, plus links to vendors, logo files, DXF files for water jet cutting, IGES files for CNC machining, and all the original SolidWorks files in their native format.  The Plans-On-Disc set includes the three discs included with the Deluxe Plans-Set, but without printed plans and bound manual.  It is, however, a complete stand-alone set of plans.  You can zoom into a particular part and print the drawing with your standard printer.  If you prefer large prints and a bound printed manual, it’s best to get the Deluxe Plans-Set.

THIS CAR IS NOT THE FUTURE

We understand that sometimes it takes a radical re-think to shake up the established order, to realize that tried and true ways of doing things are in fact just old and tired. And we know true change requires being free to dream up unconventional ideas. It’s a road, one trod by the likes of Newton and da Vinci, that leads to true innovation and a better, brighter future.

On the other hand, sometimes it leads to something like the XR3 Motors Plug-In Hybrid. For the love of Buddha, why do people keep making things like this?

The XR3 is the work of Robert Riley, whose DIY plans include the one-man Aquasub and the Try-Flyer hovercraft. He created his first do-it-yourself plans for Popular Mechanics more than 40 years ago, and Wired wrote a blurb about him in 2000. Now he’s back with, well, we’ll let him explain it.

“In June, 2008, Robert Q. Riley introduced the 125-mpg XR3 plug-in hybrid, a stylish three-wheeled ‘personal transit vehicle’ (PTV) that home craftsmen could build from plans. Now the design is headed for production, which was the goal Riley had in mind all along. If he’s successful, it could establish an entirely new category of vehicles and change the landscape of personal mobility.”

So says XR3 Motors in a press release that landed in our email, and who are we to argue? OK, here’s what we can argue about:

First off, let’s not mention the word “style.” Now, there’s nothing inherently wrong with a three-wheel planform, which is used by the likes of Aptera Motors to maximize efficiency and range. But what the hell is that thing on the nose? It looks like a blower from a top fuel dragster, but we’re pretty sure it’s not. A single lift door/windshield/roof? That’s a Kelmark GT-level design mistake? And then there’s the Honeycomb grillwork on the tail. It’s never a good idea to crib design cues from a ’78 Trans Am.

And what the hell is a “personal transit vehicle”? Can’t you just call it a car? Why is it that every garage tinkerer in the known universe has to come up with what they feel is a snazzy new name for what they’re doing rather than simply stating, “It’s a car.”? Calling it something new doesn’t mean it’s something new, it only means you’re wasting time on BS names rather than more important things, like, say, design. Yeah, we know. It’s only got three wheels, so it ain’t a car. That’s beside the point, now isn’t it?

Then there’s the idea of a car “home craftsmen could build from plans.” What could possibly go wrong? Sure, it worked for Colin Chapman and his immortal Lotus Seven, but Chapman revolutionized Formula 1 with the monocoque chassis. We’ll wager none of the people on the XR3 team approach that level of engineering or design know-how.

And how about this: The drivetrain consists of 23hp diesel engine, and Li-Ion battery pack powering electric motors, but both systems are working at, we think, opposite ends of the car. XR3 calls it a “ground-connected parallel hybrid,” which means there’s no mechanical transmission between the two power systems, which means we’re baffled as to why they’d admit something like this: “We needed a simple way to integrate two very different power systems, and I wanted to avoid computer controls and costly transmissions that are common to today’s hybrids. So I designed a $10 throttle integrator mechanism. But I spent several sleepless nights pondering whether it was too simple to actually work. Amazingly, it works better than my wildest dreams!” according to Riley.

Of course, we could be wrong. Lord knows we often are. The mechanicals could be there. The engineering could be workable for the home builder. And the XR3 people could wake up in the middle of the night with a Pininfarina-level design inspiration that turns this into the road-going version of Gina Lollobrigida. But we doubt it.

The only landscape that the XR3 is going to change is the landscape of our retinas, and we worry that it might be permanent. 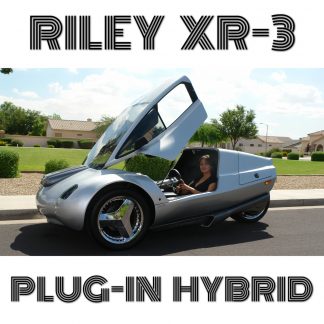