The Slepcev Storch (English: Stork) is a Serbian type-certified, kit and ultralight STOL aircraft, designed by Yugoslavian-Australian Nestor Slepcev and currently produced by Storch Aircraft Serbia in several different versions. The ultralight version is a 3/4 scale replica of the Second World War Fieseler Fi 156 and is supplied as a kit for amateur construction or as a complete ready-to-fly-aircraft.

The aircraft was first flown in 1994. It was originally manufactured by Slepcev’s company, Slepcev Aircraft Industry of Beechwood, New South Wales, Australia. The company was later renamed Storch Aviation Australia. The aircraft was type-certified in 1999 to the Joint Airworthiness Requirements – Very Light Aircraft (JAR-VLA) standard, with contributions from aeronautical engineer C. W. “Bill” Whitney.[6] Production then moved to Serbia where a Fédération Aéronautique Internationale microlight category model was developed.
Like the original Fi 156, the Slepcev Storch features a strut-braced high-wing, a two-seats-in-tandem enclosed cockpit, with extensive glazing, fixed conventional landing gear and a single engine in tractor configuration. It is made from welded steel tubing with its flying surfaces fashioned from sheet aluminium and covered in doped aircraft fabric. The ultralight version has a 10 m (32.8 ft) span wing with an area of 15 m2 (160 sq ft), large flaps and leading edge slots. The wings are supported by V-struts and jury struts. Engines fitted vary by model.

The designer has a keen interest in Second World War history and wanted to use an example of his Storch design to re-enact the 12 September 1943 rescue of Benito Mussolini by Otto Skorzeny and his SS commandos from his imprisonment by Italian partisans on the Gran Sasso mountain. It took Slepcev a year to gain Italian approvals for the flight and on 24 August 1996, he landed a Storch Mk 4 at the site, 53 years after the original dramatic rescue had taken place. 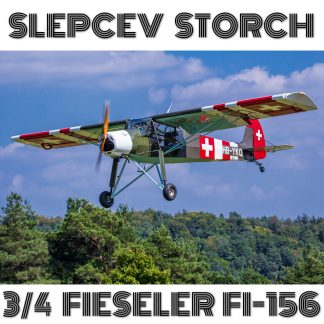