The Wittman Tailwind is a popular two-seat light aircraft for homebuilding. It is a high-wing, braced cabin monoplane of taildragger configuration. It is constructed with a steel tubing fuselage, wood wings, and fabric covering. It offers exceptional cruising speeds and is economical to operate and maintain.The Tailwind is the third in a series of high-wing aircraft designed by Sylvester J. “Steve” Wittman (1904–1995), a well-known air racing pilot and race plane designer, who also played an important role in the emergence of homebuilt aircraft with the Wittman Tailwind and other designs in the United States. The first, the Wittman Buttercup two-seater, and later the Wittman Big X four-seater, which was bought by Cessna to use its spring steel landing gear. The Tailwind also inspired the last iteration, the O and O Special. A model of the 1965 Wittman Tailwind may be found in the Sun ‘n Fun Museum.
Wittman developed the C-85 powered “Flying Carpet” in 1953, later renaming it to the “Tailwind”. In 1953, the Tailwind became the first aircraft covered under the FAA’s Experimental category to be certified to carry a passenger. While crude looking by modern standards, it outperformed many similar factory-built planes, and only with the advent of composite construction were new designs able to achieve similar speed per horsepower and range.

A supremely quick, deceptively simple and charismatic plansbuilt design survives the test of time.
Builders joining the ranks in the last decade or two probably have a passing knowledge of Steve Wittman, recognize the name, but not much else. Most are aware of his contributions to landing-gear design—a slim tapered steel rod to replace the flat spring-steel or Cub-style designs popular in the infancy of homebuilding. Wittman divined that a carefully shaped metal rod could be light, strong and durable, and be easily slid into a mating socket inside the fuselage. Elegant, clean, superior. The Wittman gear is still among the most popular choice for fixed-gear homebuilts.
Wittman was an eager air racer, that’s true, but his accomplishments extend far beyond success in competition. The Tailwind design was a true pioneer in the Experimental/Amateur-Built field, and Wittman offered his airframe, body and expertise to prove the strength of the design and establish G-load limits for homebuilts. His was also the first aircraft to be approved to carry passengers (not for hire), a freedom we take for granted today. In 1953, when the Tailwind first flew, the sport that would eventually cater to 30,000 airplanes and many more pilots was still an oddity that followed the postwar boom and crash of the general-aviation market.
As the 1950s becomes a blurry image in the rearview mirror, Wittman’s other accomplishments threaten to be consumed by time.
But not if builders like Jim Rust have anything to do with it. Among Wittman’s many accomplishments are two standout homebuilt designs that set the bar for speed and simplicity, and that remain fairly popular aircraft for plansbuilders today. They were created at a time before computer-controlled manufacturing allowed complicated shapes in aluminum, before fiberglass had taken hold, and while the production-aircraft manufacturers were still using steel-tube, wood and fabric.
Much of the Tailwind design derives from the materials chosen and the understanding that builders of the time wouldn’t have access to much more than a hacksaw, welding set and a few basic airplane-building tools. Compound curves, the very thing so flaunted by the new-age plastic airplanes of the 1980s, are difficult to create in your garage, so the Tailwind has few of them. The slab-sided fuselage may look stodgy and un-aerodynamic, but that’s not true. In fact, the sharp break at the corners helps reduce interference drag between the wing and the fuselage, and that’s one of the big drag producers in light aircraft. A boxy shape also has inherently more structural rigidity, so the tubular members can be smaller, lighter and (important in the day, and today) less expensive.
“I’ve always been interested in Tailwinds,” says Rust, whose Tailwind is such an amazing display of workmanship that the photos truly do it an injustice. “My dad started one but wasn’t able to finish. It made me aware of Tailwinds, and I would always see them at airshows. It took several years before I was able to begin construction, and even then I spent a lot of time just gathering parts before I began what you would call building.”

It wasn’t just a sentimental bent that pushed Rust to build the Tailwind. “I really put a pencil to the performance numbers,” he said, “and it comes out really well. For the power, there’s really nothing that meets or exceeds the Tailwind’s performance.” Think about that. Fifty-eight years ago, the first Tailwind design was being developed, and today it’s still competitive. Don’t believe us? In 1994, the CAFE Foundation tested Jim Clement’s 160-horsepower W10 and recorded a barograph-derived, super-stinkin’-accurate cruise speed of 188 knots on 9.6 gph at approximately 7000 feet. Its best performance was 189 knots true at 8666 feet and 11.8 gph. Perspective check coming up: CAFE also tested a Lancair 320, which was in the 220-mph range (191 knots) at 8000 feet. Box versus Coke bottle. Fixed gear versus retractable. Elbowroom versus, well…not so much.
During the build, you can see the Cessna-style baffling and metal boot cowl, along with the modifications to the engine mount to accommodate the Grove landing gear.
“The key to Tailwind performance,” says Rust, “is that it’s a small, light airframe with good aerodynamics.” Indeed, his Tailwind weighs just 875 pounds empty, which is pretty good against the 1425-pound maximum gross weight. Externally, his is identical to the plans for the later W10, including the tapered, upswept wingtips—the original W8 had simple tips on the constant-chord wing—seemingly too-small airfoil-shaped lift strut, and the size and configuration of the tail section.

Not to say Rust’s airplane is right off the pages of the plans. For starters, he built a set of integral wing fuel tanks. The normal way is to build a welded-aluminum tank slung beneath and ahead of the instrument panel. The capacity called out in the current plans is 35 gallons. Rust has access to high-tech composites, so he built what amount to structures within structures. A pair of carbon-fiber boxes hold the fuel and extend from one rib outboard of the attach points to three ribs shy of the tapered tip. Each “box” contains internal ribs that carry torsional loads. The tanks are bonded to the front and rear spars and carry small cap strips to locate the plywood skin. Total capacity is 50 gallons, according to Rust, “and probably a doubling of the wing’s torsional strength. Actually, the whole airplane is strong. I analyzed the structure—wingspars, strut and cage—and it easily meets the criteria for an airplane certified in the Utility category.”
Removing the tank from the fuselage improves access to the panel and creates more room for goodies. But those tanks are not the most visible change you’ll see in Rust’s Tailwind. “I decided to use a set of Robby Grove’s airfoil-shaped aluminum landing-gear legs,” says Rust. “They’re a really cool set, with a 6500-series airfoil shape and gun-drilled passages for the brake fluid. I created a new engine mount with pads to locate the gear; it’s similar to what Grove sells for the Van’s RV-8.”
Tailwind watchers will also notice that Rust’s W10 has the Clement door mod, which increases the size of the door opening by pushing the rearmost frame members aft at the top; this is a common modification to improve access to the cabin and baggage area.
Rust’s W10 uses the 150-hp IO-320 Lycoming, a common choice these days. The design has flown with many different engines, with Wittman preferring the six-cylinder Continental O-300/C-145, which was used in the Cessna 170s and early 172s. “But I know a lot of them are flying with Lycoming O-290s, which I think you could get for a few hundred bucks in the early days,” Rust says. While many Tailwinds use a fixed-pitch prop, Rust uses one of his own Whirlwind constant-speed props. (You are surprised at this?)

“Well, honestly,” Rust says with a chuckle, “the plans are pretty terrible. But the good news is that there is a big support group around the airplane. Guys like Jim Clement [the builder whose airplane was tested by CAFE and provider of many prefabbed parts for the W10] are around to help, and there are enough flying that many of the difficult parts of the build have been figured out by someone else. There’s a big fan club and a lot of enthusiastic builders out there.” Getting peer support is not an issue.
“It’s not an intimidating build,” Rust continues. “A lot of guys get hung up on the welding. It’s just not a big deal. You can have the fuselage welded and ready to go in 200 hours. I decided to TiG weld mine because I had the equipment and skill, but a lot of guys gas weld the fuselage and that’s fine. It’s not a complicated structure to make.” The 4130-spec frame doesn’t have a lot of complex joints, and it can be laid out without sophisticated jigging. “This is what I love about the Tailwind,” says Rust. “It’s an elegantly simple airplane that you can build with a hacksaw and a torch in your garage.”
The wings are straightforward, too. “You can build one in 100 hours,” says Rust. In all, the Tailwind can be finished in around 2000 to 2500 hours, so say those in the know, but that’s assuming you don’t go crazy with modifications and take it easy on the avionics suite. “It’s interesting that the basic structure goes together easily, but you can spend a lot of time on the little things like fitting the glass [including windshield that wraps up and over into the roof] and getting the seats the way you want them. Plus, you might get to make your own cowling. I used my design, but there are sources for prefabbed cowlings.” Back when the design was new, builders were left on their own. “It didn’t really say what to use,” Rust continues. “That’s why you’ll see some with Piper stamped nose bowls, and some made totally from scratch. Until recently, Tailwinds all looked quite different because this part was left to the builder, but they’re starting to look more alike now.”
In all ways that matter, the construction methods used in the Tailwind are conventional, at least by 1950s standards. Wood wing, steel-tube fuselage, fabric covering on the fuselage and tail group—all materials and practices familiar to anyone who has restored a Cub or repaired a Maule. And time keeps improving the case: The aluminum wing control surface on Rust’s airplane is a popular modification—replacing the steel-tube/fabric arrangement used originally—to reduce weight, cut costs and further simplify the design.

It’s more a commentary on modern building practices favoring a high level of prefabrication that there aren’t more Tailwind projects being completed. Four years ago, in our 2007 Plansbuilt Buyer’s Guide, 375 W10 Tailwinds were said to have flown. That number is up by just two in our most recent survey of plansbuilt designs—though we have to wonder if the accounting or reporting is a little suspect.
Strength may come in numbers—even as it’s fair to say that Tailwind enthusiasts are as vocal as any larger, equally partisan group—but for Steve Wittman’s enduring design there is the cachet of having created a machine from “scratch,” and having done so for a fraction of the cost the prefabbed machines exact. It’s not uncommon to spend less than $30,000 for a very nice example with reasonable equipment. If that isn’t a lot of airplane for the cash, we don’t know what is.

So Much for Backstory: How’s It Fly? 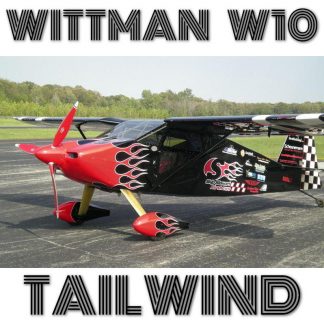