There is an assumption by some that because an airplane is a light-sport airplane (LSA) that it is a compromise and can’t fulfill the function expectation of a “real” airplane. It is assumed that it will be lighter, smaller, and slower. Of course that isn’t necessarily true, especially in the case of Bob Barrow’s latest design, the new Bearhawk LSA

“From the moment you climb aboard the Bearhawk LSA, you feel like you are sitting in a real substantial, solid airplane.”

The prototype Bearhawk LSA came in at 728 lbs. empty weight, with an aluminum prop and no electrics. Barrows estimates that 750 pounds is a realistic empty weight for a builder who works hard to keep the airplane light. With the LSA maximum gross weight of 1320 lbs. (in the utility category), this 2-place LSA has a very respectable useful load. Barrows has said that the airplane is really designed for a max gross weight of 1500 lbs (in utility category), so there is a built-in margin of safety for those who do not have to fly under the LSA rules.

The Bearhawk LSA can take off in as little as 200 feet and climb at 1500 ft. per minute and then level off and cruise at 120 mph sipping only 5 gph.

The Bearhawk LSA utilizes the traditional 4130 Chromalloy tube and fabric along with all-aluminum, flush riveted wings.

The Bearhawk LSA can stay aloft for a very long time. Barrows reports an economy cruise speed of about 110 mph sipping only 4 GPH with the Continental C-85 engine. With a 30 gallon tank that gives you over 7 hours in the air. Not many vehicles can do 110 mph only consuming 25 miles per gallon. If you want to get there a bit faster, you can push it up in cruise to 120 mph burning about 5 GPH.

Also, with a nice roomy cockpit, you can cruise in comfort. The cabin width is a spacious 31” wide and 97” long. The Bearhawk LSA can be flown with the windows open for taking those perfect aerial photos.

The Bearhawk LSA is an American amateur-built light-sport aircraft, designed by Bob Barrows and produced by Bearhawk Aircraft of Austin, Texas. The aircraft is supplied in the form of plans or a kit for amateur construction.

The aircraft was introduced to the public at AirVenture 2012.

The Bearhawk LSA is a “clean sheet design” inspired by the larger Barrows Bearhawk. The LSA features a strut-braced high-wing, a tandem enclosed cockpit accessed by doors, fixed conventional landing gear and a single engine in tractor configuration. The cockpit is 31 in (79 cm) wide. In 2015 a quick-build kit was introduced at the U.S Sport Aviation Expo.

The aircraft fuselage is fabricated from welded 4130 steel tubing covered in doped aircraft fabric. The aluminum structure wing, covered in flush riveted aluminum sheet, employs a new Harry Riblett-designed airfoil and does not have flaps. The wing is supported by a single strut per side. The engine power range is 65 to 100 hp (48 to 75 kW) and the recommended engines include the 65 hp (48 kW) Continental A-65, 75 hp (56 kW) Continental A-75 and the 100 hp (75 kW) Continental O-200 four-stroke powerplants.

As of February 2016, four examples were registered in the United States with the Federal Aviation Administration. 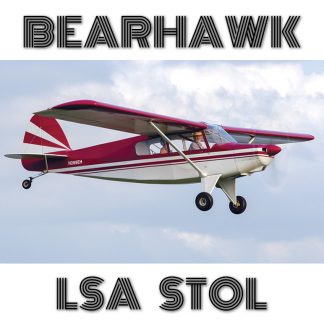