DELIVERY IS POSSIBLE IN TWO OPTIONS:
– DOWNLOAD WITH GOOGLE CLOUD – 0-3 DAYS,
– USB FLASH DRIVE BY MAIL – 14-45 DAYS – DEPENDS ON THE RANGE OF YOUR COUNTRY AND CUSTOMS RULES.
BY BUYING A PRODUCT YOU WILL RECEIVE:
– SCAN OF DRAWINGS FOR BUILDING YOUR PLANE,
– MANUALS,
– PHOTOGRAPHY AND VIDEO.
DELIVERY IS FREE.
THANK YOU FOR YOUR PURCHASE.
Category: PLANS AND MANUALS Tags: CH-750, PLANS AND INFORMATION SET FOR HOMEBUILD AIRCRAFT, STOL, ZENITH

Based on the popular STOL CH 701 design from Chris Heintz that was first introduced more than 25 years ago, the STOL CH 750 design incorporates all of the 701’s amazing short-field capabilities, while maximizing cabin size and load carrying capability allowed under the FAA’s Sport Pilot / Light Sport Aircraft category.

Like the original, the STOL CH 750 aircraft was developed as an “off-airport” short take-off and landing kit aircraft to fulfill the demanding requirements of both sport pilots and first-time builders. Designer Chris Heintz has combined the features and advantages of a “real” airplane with the short-field capabilities of “ultralight” aircraft. The aircraft features fixed leading-edge slats for high lift, full-span flaperons (both ailerons and flaps), an all-flying rudder, and durable all-metal construction. The modern STOL CH 750 design is available as an easy-to-build kit which revolutionizes ease and simplicity of construction, drawing upon Zenith’s decades of experience in the kit industry.

The Chris Heintz-designed STOL CH 701 is a workhorse. It has been performing short takeoff and landing (STOL) duty for 20 years and has developed a cult following. Its big brother, the STOL CH 801, is a lot bigger, with twice as many seats and room inside. So, with small and large STOL machines, what else would Chris Heintz fans want? How about a mid-sized S-LSA STOL machine?

They have one: the new STOL CH 750. It looks a lot like the CH 701, but it’s different in significant ways: it’s wider, and it is available ready-to-fly with the TCM (Continental) O-200. Its gear is stronger and wider, and visibility is improved. The CH 750 is 2 inches taller and 11 inches longer and has a 2-foot 9-inch greater wingspan than the CH 701; wing area is 144 square feet, as opposed to the smaller plane’s 122. Horizontal tail surface area is up by 17 percent; empty weight is 33 percent greater, and gross weight is up by 18 percent, to the LSA limit of 1,320 pounds. Useful load is now 545 lbs., 25 percent greater than the CH 701. And increased fuel capacity can use up virtually all of that: it hold 24 gallons, versus the smaller machine’s 20. Even with the bigger engine, the faster, bigger, heavier plane has 10 percent greater range, and performance is improved in nearly all dimensions.
The Zenith CH 750 may never win a contest for sleekness and style, but its beauty is found in what it can do.

The Specifications of the Zenith STOL CH750 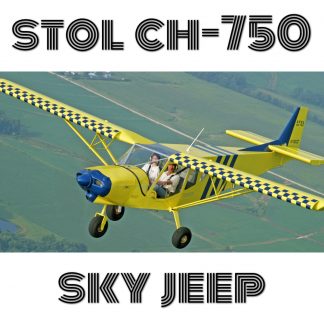