Find the right answer the first time with this useful handbook of preliminary aircraft design. Written by an engineer with close to 20 years of design experience, General Aviation Aircraft Design: Applied Methods and Procedures provides the practicing engineer with a versatile handbook that serves as the first source for finding answers to realistic aircraft design questions. The book is structured in an “equation/derivation/solved example” format for easy access to content. Readers will find it a valuable guide to topics such as sizing of horizontal and vertical tails to minimize drag, sizing of lifting surfaces to ensure proper dynamic stability, numerical performance methods, and common faults and fixes in aircraft design. In most cases, numerical examples involve actual aircraft specs. Concepts are visually depicted by a number of useful black-and-white figures, photos, and graphs (with full-color images included in the eBook only). Broad and deep in coverage, it is intended for practicing engineers, aerospace engineering students, mathematically astute amateur aircraft designers, and anyone interested in aircraft design.

Snorri Gudmundsson, Department of Aerospace Engineering, Embry-Riddle Aeronautical University. From 1995-2009, Dr. Gudmundsson served as Manager of Aerodynamics Engineering at Cirrus Design Corporation. He has performed testing, analysis, and performance analysis review on variety of single and twin engine small aircraft. He is also a Consulting Designated Engineering Representative for the FAA as a Structural and Flight Analyst.

“…a splendid book…For anyone involved in the design of general aviation (GA) aircraft and those deeply interested in the subject, this book is highly recommended.” –The Aeronautical Journal, General Aviation Aircraft Design
“A truly excellent book on aircraft design. Unlike many modern text books, it really tells the “story” of the subject with lots of current, real-world examples, data, and cautions, along with the mathematical equations that dominate many engineering texts. On that note I’d put it in with the aeronautical engineering classics like Perkins and Hage, or Bruhn for aircraft structures. The illustrations and graphics are also first-rate. I believe that this book will find wide acceptance among practicing engineers and students.” –Brian E. Meyer, Manager, Aircraft Applications Engineering, Hartzell Propeller Inc. 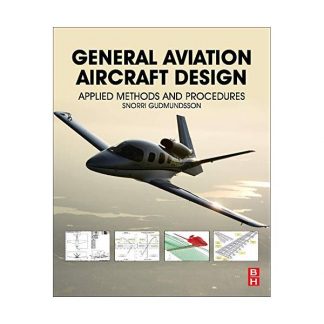