The original flying prototype airplane has registration OK-WUC 01, and is still flying.
The design was created by myself, and my friends, aircraft engineers M. Meciar, and J. Vychopen. We were assisted by other members of Gryf UL club based in the town of Uherské Hradište, Czech Republic.
The first work on the Gryf (it is now called the Griffon) project began in 1984, for the purpose of determining a preliminary aircraft airworthiness standard for Ultralight aircraft in the Czech Republic. This particular aircraft was created as a project after working hours in the LET Aircraft Factory with the assistance of our factory. We began with almost nothing. At this time in our country there were less than ten private experimental aircraft, and no ultralights. We had only a little information from some issues of magazines “borrowed” from the other side of the “iron curtain”. Under these circumstances, reading a magazine like KITPLANES or SPORT AVIATION was merely a dream for us. However, we combined what little information we had with our experiences from the large aircraft industry, from building hang gliders, and from research, conducted in our aeronautical classes at College.
At the end of 1987 the original aircraft was almost finished, but problems with our engine (first one was a rebuilt two-stroke car engine called a “Trabant”, with a drive shaft similar to older Quicksilver’s) gave us more delays. The distance to Gunskirchen, Austria (hometown of the Rotax factory) is less than 100 miles from us, but to buy a “western” engine was not allowed during those years. So, the first flight of the Griffon was made with a lighter “home-built” amateur engine, called the Astro 600, made in our country.

Originally, the Griffon had wings with spoilerons. The aircraft was a little lighter, but the flying characteristics were not very friendly. For this reason, the LET factory agreed to assist the effort by sponsoring a flight test program, using “official” test pilots from the company. Spoilerons were changed to differential ailerons, and the problems were solved. At the Military Academy in Brno, we were able to obtain wing testing and proof for the +6g and -3g load factor.
Flying characteristics were much better with the change to ailerons, but for “mass production”, we were still faced with problems regarding the engine. Performance and dependability were low too.
After the fall of Communism in our country, known in our country as the “Velvet revolution”, our major sponsor, LET, lost interest in the project. Manufacturing was shifted to a small private firm called TIB in the town of Kolín. The principal owner of this firm, Mr. Beránek, suggested our aircraft use a “new” engine, the Rotax 447. The possibility of buying a “western” engine was no longer prohibited, and it solved the problem with the power plant. It was a very good milestone for this plane.
With the installation of the 447, the Griffon now had the ideal combination of performance and flying characteristics. With Rotax 447, it has a maximum speed of 60mph. and climbs around 800fpm.
Some of us wanted this “much too powerful” engine to use for our two-seat Gryf ULM-2, which was being developed with collaboration of another factory, but after our first flight in the cockpit we didn’t want to hear about it. The Rotax 447 seemed a perfect match, and so stayed on the Gryf. A small number of Gryfs, manufactured by TIB in Kolín were changed in some design details, but these changes were not very substantial.

During this time in our country, regulations for building ultralight aircraft were introduced, but there were no regulations for flying this type of light plane. So, our “test pilots” flew our plane, and we “evaluated” the aircraft during every flight.

After the beginning of our Light Aircraft Association (LAA) our seven-year effort to create an ultralight pilot license became a reality. At that time, the Gryf was still one among a very small number of private aircraft in our now “free” country, and our experiences flying it were really excellent. Much has changed in these last ten years.

The Gryf was the winner in a design competition sponsored by the Czech Light Aircraft Association (LAA), and we have had very good experiences with it. Years after its design and inception, we have flown in new two-seaters with higher speeds, ranges etc., but the Gryf is still (according to hangar flying) best flying of them all.

Now my friends in our flying club have their own Gryf planes, and our planes are flying in many countries, such as Sweden, France, Belgium, Luxembourg, Spain, Turkey, South Africa, Australia, and others. Our aircraft have competed in the European and World UL championships in the Czech Republic, Great Britain, South Africa, Spain, and Turkey.
Gryf was represented in the United States by Interplane USA during Sun ’n Fun ‘99.

Fuselage
The main front part of the fuselage structure (cockpit) is connected to aluminum alloy tubes. The main frame has undercarriage brackets and seatbelt attach points, and an integral “seating” frame connects the front part. The top of the fuselage completes the upper fuselage “cage” and connects with wings at the top, with brackets and the integral engine-mounting hardware. Rear section of the fuselage is made from three Aluminum alloy tubes. The aerodynamic fiberglass fuselage fairing has a front Plexiglas windscreen. The rear section of the short under-wing covering has rubber-stressed fabric.

Tail Unit
The tail unit is made from aluminum alloy tubes. It has supporting cables, fabric skin, and a small tail skid. The rudder has 25° deflection , the elevator has 25° up, 15° down deflection.

Wings
The front wing spar, rear wing spar, and the wing struts are made from “aircraft grade” aluminum alloy tubes. The wing uses pressed aircraft aluminum ribs and has a NACA 4412 section. It has tubular wing strut bracing with simple wing strut brackets, and jury struts for negative g loads. Ceconite Dacron wing covering or similar is recommended, with leading edge reinforced with hard plastic. Tubular structure aileron with profile trailing-edge (20° up, 10° down deflection) has the same fabric skin.

Powerplant
Rotax 447 UL engine with reduction ratio 1: 2.58, with a Rotax 503 an option. A wooden propeller is standard, with a ground adjustable 3-blade composite propeller an option. Fuel tank has 5-gallon capacity. 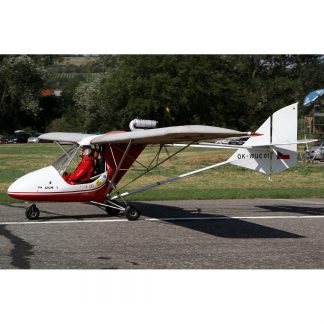