The only all – metal, two place plane for the homebuilder with features not found in others.

The two-seat MFI-9HB is an all metal, high performance, shoulder-winged monoplane with excellent safety record.
It is fully certified according to FAR 23 in the utility class at gross weight.
The aircraft is designed for a 100 HP Rolls-Royce/Continental 0-200-A four cylinder engine but other powerplants of similar weight and power can be accomodated. The aluminum fuel tank holds 21 US gal.
The tricycle landing gear employs a steerable nose gear. The main gear consists of maintenance-free tapered steel rods. The
MFI-9 HB is also certified for skis and floats. The wings are strut braced. The mass-balanced ailerons are hinged to the top surface. The plain flaps are electrically operated.
The cantilevered tail unit consists of a swept fin and rudder and an one-piece massbalanced horizontal elevator with a large anti-servo and trim tab.
The cockpit accomodates two heavy weights. Dual controls are standard. The visibility is considered the best in the industry.
The heating and defrosting system is very efficient.

The two-seat MFI-9HB is an all-metal, high performance, shoulder-winged monoplane with an excellent safety record.
As a production aircraft, it was fully certified according to FAR pt.23 in the utillity class at gross weight.
The aircraft is designed for 100 HP Continental 0-200A four cylinder engine but other powerplant of similar weight and power can be accomodated. The aluminium fuel tank holds 21 US gallons.
The tricycle landing gear employs a steerable nose gear. The MFI-9HB was also certified for skis and floats.
The wings are strut braced. The mass-balanced ailerons are hinged to the top surface. The plain flaps are electrically operated.
The cantilevered tail unit consist of a swept fin and rudder and an one-piece massbalanced horizontal elevator with a large anti-servo and trim tab.
The cockpit accomodates two heavy weights. Dual controls are standard. The visibility is considered the best in the industry. The heating and defrosting system is very efficient.
Flying qualities are excellent and make normal aerobatic training feasible.
In spite of its good over-all performance the MFI-9HB is very simple to build.
The MFI-9 HB builder has the option to build either kits or source for his own materials. Non-kit builders will have to have tempory access to a good shear and bending machine (or brake press). Some of the jobs requiring this heavy equipment can of course be “farmed out” to suitable shops.
The 95 professionally made drawings are supplemented by separate material list with position nos., no. required per aircraft, material, next assembly etc.

All materials, standard parts and equipment is U.S. Standard.

The MFI-9 and its predecessor the BA-7 were designed by Bjorn “Andy’1 Andreasson(EAA 1334). “Andy’1, a native of Sweden, built the BA-7 in his garage in San Diego, while employed as an engineer at Convair. The BA-7 first flew in October 1958. Andy returned to Sweden in 1960 and interested Malo Flygindustri in the production rights for the BA-7. It was renamed the MFI-9 and production commenced on the “A” series model in 1961. A production agreement was also reached with the West German aircraft firm of Bolkow-Entwicklugen KG, Munich.
Bolkow produced the airplane as the BO 208. Malmo refined the MFI-9A into the “B” model while attempting to interest the Swedish government in it as a military trainer. Among the improvements were an enlarged cockpit, seats moved aft, electrically operated flaps, and enlarged vertical tail surfaces.
It was the development of the military version that prompted the Swedish nobleman Count Carl Gustave von Rosen, in 1969, to use five MFI-9B’s against the Nigerian air forces during the Biafran civil war. The five MFI-9’s were equipped with rocket pods under each wing. The pods were capable of loading six French 76 millimeter rockets. The following use of these MFI-9’s is dramatically told in the “Soldiers Of Fortune” volume of the “The Epic Of Flight” series by Time-Life Books.
One MFI-9C model was produced. The major difference between the “B” and “C” model was the installation of a Continental/Rolls Royce 0-245(130 hp) engine in the “C”.
The MFI-9 is certified in Europe for skis, floats, and glider towing.
No machining, welding, or complicated forming is required in constructing the MFI-9HB airframe. Various flat fuselage and wing skins are cut to final shape with a pair of snips.
The fuselage is extremely simple. The firewall is made up of preformed stainless steel sections. All main and aft bulkhead parts are preformed and cut to size. The aft part of the fuselage consists of four external longerons and flat skins. Production MFI-9’s had external beads formed in these skins to dampen excessive vibration. Kits will use strips of sound deadening tape to achieve the same result. This eliminates expensive tooling and the builder does not have to contend with the beads when designing a paint scheme. The curved bottom cockpit skin is supplied completely preformed.
Two noticeable features of the wing are its forward sweep and “droop snoot” leading edge. The three degree forward sweep affords excellent visibility from the cockpit while keeping the center of gravity within permissible limits. The* “droop snoot” leading edge has the effect of providing a more forward center of pressure at higher angles of attack, thus offsetting the strong pendulum action of the center of gravity. The main wing spar is an extruded aluminum I-beam (4″ web and 2″ flange). All necessary cutting and forming of the spar has been done by the factory. Only eight ribs(supplied preformed in the kit)are used in each wing. Airfoil is an NACA 23008.5 section modified at the leading edge.
Wing thickness is 8%.
Getting into the MFI-9HB is not much of a problem. Dual throttles are located on the extreme right and left side of the instrument panel, and are connected by a transverse torque tube behind the panel. Friction on’the throttle is adjusted by a small knob on the center of the panel. Cleveland hydraulic brakes are actuated simultaneously by a lever mounted on the left side of the lower instrument console. A simple ratchet lock disengages easily by pulling
the handle to one side. The MFI-9HB will turn 360 degrees in its own length. The anti-servo trim tab mechanism consists of a cockpit lever which moves a sheathed, steel rod connected to a bellcrank at the tailpost. The bellcrank, fitted with a small friction-disc brake is linked to the tab by a short rod.
Flaps are electrically operated by a toggle switch located next to the left throttle. A flap position indicator is marked to show any position from 0 to 35 degrees.
During takeoff the controls are firm and well balanced. There is no tendency to swing because of the propellor slipstream acting on the rudder.
The 1\ degree offset thrustline along with the tricycle landing gear both help with this stability. With two aboard the MFI-9HB accelerates well and lifts off at about 52 knots. The elevator has a positive feel and lift off is precisely controlled, the airplane responding to the stick. Climbout can be fairly steep, but the canopy and thin-sectioned shoulder wing configuration gives unobstructed visibility. Rudder firmness is apparent. The MFI-9HB cuts through gusty air without wallowing. It can be trimmed to fly hands off by virtue of the elevator trim control and longitudinal stability. The ailerons, although small, are very effective. A 360 degree roll can be completed in less than three seconds. Loops have to be pulled around sharply in the first half to maintain enough speed over the top without stalling. Failure to do so causes the MFI-9HB to roll out by itself. At low speeds and with normal handling the airplane will not stall in the normal sense. With two aboard and full flaps it can slowed to about 51 knots indicated without loss of altitude.
Elevator effectiveness and wing-lift give out together. Full aileron remains so that there is a steep decent with strong buffeting and the nose just below the horizon, with the ability to waggle the wings and swing the nose to correct wing topping. Landing approaches can be fairly steep, the flaps going up or down rapidly. A precise, smooth flair is effortless because the stick loading becomes heavier in direct proportion to the decaying airspeed. Letting the airplane fly two feet off the ground, it lands itself. Even at the recommended approach speed of 70 knots, the landing roll is not long. 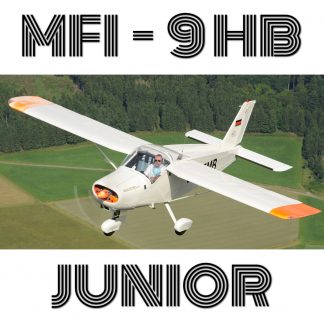