The ProFe D-8 Moby Dick is a family of Czech pusher configuration, parasol wing, strut-braced, V-tailed, motor gliders that was designed and produced by ProFe. The aircraft is named for the great white whale of Herman Melville’s novel of the same name and was supplied as a kit for amateur construction.

The first glider in the series was the single seat Mini Straton D-7, which was designed in 1988 and first shown in the United States at AirVenture in 1992. This was followed by the improved single seat Straton D-8 and the D-8 Moby Dick two seater. All aircraft in the series share the same unusual configuration.
The aircraft are built around a predominantly aluminium frame, with use of fibreglass and aircraft fabric covering. The Moby Dick model also incorporates wood in the structure. The fuselage is of conventional sailplane type in appearance, but the semi-tapered wing is suspended above the fuselage on cabane struts, supported by lift struts, with the pusher engine mounted at the rear of the wing. The Straton D-8 has a monowheel landing gear, while the Moby Dick has two closely spaced, fuselage-mounted wheels. All models have optional outrigger wing tip wheels.

– max. permissible flight speed InNO ……. 132 km/h
This speed under any circumstances do not exceed !!!
– stall speed at max take-off weight InSO ……. 55 km/h
– max. allowable wind speed in the direction of the axis of the track against the flight …….. 8 m/sec
– max. allowable wind speed perpendicular to the axis of the runway …….. 3 m/sec
– takeoff and landing with the rear the wind outside the emergency procedures not to carry out.
– the extreme positions of the center of gravity from the the leading edge of the wing
–front centráž ……. 425 mm
–back centráž ……. 505 mm

– Sharp turns to the 60about tilt
– Intentional spins, falls and aerobatics are Of And Á From Á N Y !!

The limitation of the operation

Outside the prohibitions of the applicable legislation is likewise forbidden to:
– taxiing with an open canopy.
– when leaving the aeroplane to leave the hatch open.
– overload the mooring rope additional loading.
– fiddle with the aircraft for the strut of the wing.

Aircraft type D-8 Strton “Moby Dick” is an aerodynamically controlled , two-seater ultralight aircraft with the engine in a compression arrangement for a wing, which is placed on the canopy, the chassis is two-wheel, the pilot area is covered with transparent overlapping. The aircraft is not designed for permanent operation on netravnatých operational areas.
The airframe is wooden, reinforced in the cavities of the polystyrenovými ribs. With the exception of laminate gondola cabins, duralumin bed of the engine and the strut of the wing.
All the wooden parts are glued with Epoxy glue 1200, the coating of the polyester fabric is lepen contact adhesive Chemopren 140.
The wing is divided in the middle into two halves, the two halves are to a canopy attached to the studs and supported by struts.
The supporting part of the wing forms a torsion box made of birch or beech plywood stabilized polystyrenovými ribs. The flanges of the beam are made of spruce wood 1 and 2 classes according to the standards for aircraft lumber. The whole structure including the voids is protected against moisture by applying a suitable coating. The ribs forming the rear part of the wings are they vote far right of the spruce rails.
The ailerons are pivotally stored on pianových the hinges with the axis of rotation in the upper part of the profile of the wing, controlled by rods of duralumin tubes 12×1 mm and have a displacement of 24on top and 12on bottom.
The tail surfaces are combined (motýlkovité), the helm, the deflection 30of the up and down. The design is similar to that in the wings. Connection with the hull inserting them into the cut-outs and is secured by double insurance.
The hull is in the front of the laminate gondola reinforced in the front part of the plywood stabilized polystyrenovými ribs. So arise two massive torsion box on which they are stored undercarriage wheels with a diameter of 400 mm, without suspension. The wheels are equipped with disc brakes controlled by levers on the control lever.
The rear part of the fuselage consists of a tube coiled from aviation plywood stabilized polystyrenovými ribs, top and bottom are spruce stringers. The transition between the fiberglass shell gondolas cabins and plywood tube is přelaminován-glass laminate. Spur of duralumin sheet is cushioned with a rubber block and provided with a bodkou of stainless steel. sheet.
The control lever is on the right side of the cab, the foot control is not adjustable.
The canopy is firmly connected with the bed of the engine and is sešroubován of duralumin tubes.
The drive unit can be engines of Trabant with the reducer or the Rotax engines.
The propeller is two-bladed wooden or composite depending on the engine.
Laminate the fuel tank are built into the girders of the front part of the fuselage, the left has a volume of 20 l, right 15 l. Both tanks are connected and each has a separate venting. Fuel filling is performed nalévacím throat on the left side of the fuselage. Pumping fuel to the engine ensures a fuel pump driven by air pressure from the crankcase. Fuel is supplied to the float chamber of the carburetor through a filter. 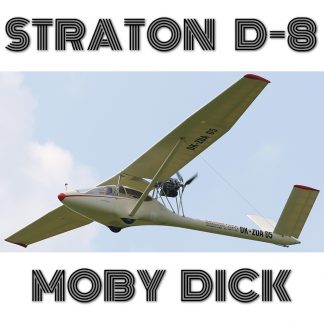