The Preceptor N3 Pup is a family of ultralight, tube-and-fabric, high-wing, homebuilt aircraft. The company was operating on a limited basis, actively selling plans online, but seems to have gone out of business in 2016.
Designed to meet FAR 103 Ultralight Vehicles standards, the N3 Pup can accept various lightweight four stroke engines of between 37 and 60 hp (28 and 45 kW). If built to specifications with minimal additions, it can meet the requirements for a FAR 103 ultralight aircraft, with an empty weight of 254 lb (115 kg). It may also be built as an amateur-built aircraft or US light-sport aircraft at higher weights.

Design and development:
The Pup is designed to be flown cross-country and also can be mounted with floats and skis.
The N3 Pup uses tube-and-fabric construction and a conventional 4-cycle engine. The fuselage and tail are welded from 4130 steel tube. There are two main wing configurations that can be built. An aluminum wing spar with hinges allows the wings to be folded for trailering or storage. A wooden wing spar configuration gives the plane a lighter weight, but leaves the wings fixed. The engine cowling is made from fiberglass.
The aircraft has had many engine choices available, but was marketed to use the Half VW engine first developed by Global engines, later bought by Mosler engines and finally marketed by TEC engines. The Total Engine Concepts MM CB-40 was the last purpose-built engine marketed for the Pup. The aircraft was sold as a partially prefabricated kit or can be built scratchbuilt from plans.
The design was also adapted as an autogyro, the Little Wing Roto-Pup.
A N3 Pup modified to look like a Citabria named “Citabriette” won the Grand Champion Ultralight award at the EAA Oshkosh airshow 1988. 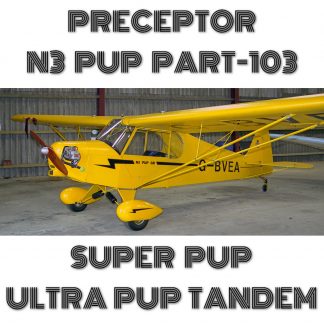