DELIVERY IS POSSIBLE IN TWO OPTIONS:
– DOWNLOAD WITH GOOGLE CLOUD – 0-3 DAYS,
– USB FLASH DRIVE BY MAIL – 14-45 DAYS – DEPENDS ON THE RANGE OF YOUR COUNTRY AND CUSTOMS RULES.
BY BUYING A PRODUCT YOU WILL RECEIVE:
– SCAN OF DRAWINGS FOR BUILDING YOUR PLANE,
– MANUALS,
– PHOTOGRAPHY AND VIDEO.
DELIVERY IS FREE.
THANK YOU FOR YOUR PURCHASE.
Categories: aerobatic aircraft, all-metal aircraft, cross country aircraft, drawings and manual, LSA aircraft, two seat aircraft Tags: PLANS AND INFORMATION SET FOR HOMEBUILD AIRCRAFT, SONEX

The SONEX is an all metal two place monoplane designed to meet the needs of the European and Domestic sport aircraft markets. The SONEX can be fitted with various light weight engines between 80 to 120 hp.
The SONEX has a very clean and aerodynamic design that gives it excellent performance. Cruising at a 130 mph at sea level is quite good!
Options are tailwheel, tricycle, center or dual sticks.
The SONEX can be flown in the US as a LSA (light sport aircraft).
The Sonex plans contain several construction options, including conventional or tricycle landing gear, as well as a center or dual stick. Motor mount drawings are supplied for all three recommended powerplants: the 2180cc Volkswagen, 2200 Jabiru, and 3300 Jabiru. High performance is achieved through a clean aerodynamic shape and simple, light weight construction.
The Sonex can be built from scratch using factory supplied drawings or may be assembled in approximately 800 to 1,000 hours using the precut complete airframe kit. A complete kit based Sonex can be constructed for as little as USD$25,600.
The aviation website Aero-News.Net named the Sonex the Plane Of The Year – E-LSA Kit Category for 2006.

Building A Sonex: What It’s Really Like
by Robbie Culver

Flight test: Sonex Aircraft LLC Sonex
Ripping through an English autumn sky at 125 knots while burning just 22 litres of fuel per hour, or reefing around in a very tight turn the same question keeps bugging us – why aren’t there more of these in the UK? | Words: Dave Unwin 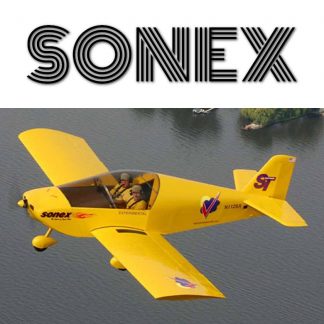 You're viewing: SONEX – PLANS AND INFORMATION SET FOR HOMEBUILD AIRCRAFT $250.00
Add to cart