DELIVERY IS POSSIBLE IN TWO OPTIONS:
– DOWNLOAD WITH GOOGLE CLOUD – 0-3 DAYS,
– USB FLASH DRIVE BY MAIL – 14-45 DAYS – DEPENDS ON THE RANGE OF YOUR COUNTRY AND CUSTOMS RULES.
BY BUYING A PRODUCT YOU WILL RECEIVE:
– SCAN OF DRAWINGS FOR BUILDING YOUR PLANE,
– MANUALS,
– PHOTOGRAPHY AND VIDEO.
DELIVERY IS FREE.
THANK YOU FOR YOUR PURCHASE.
Category: PLANS AND MANUALS Tags: HIGH PERFOMANCE AIRCRAFT!, PAPER PLANS AND INFORMATION PACK FOR HOMEBUILD, RV-3, VANS

The Van’s RV-3 is a single-seat, single-engine, low-wing kit aircraft sold by Van’s Aircraft. Unlike many other aircraft in the RV line the RV-3 is only available as a tail-wheel equipped aircraft, although it is possible that some may have been completed by builders as nose-wheel versions. The RV-3 is the genesis design for the rest of the RV series, all which strongly resemble the RV-3. The RV-4 was originally developed as a two-seat RV-3.

The architect of the line of Van’s aircraft, Richard VanGrunsven, designed the RV-3 in the late 1960s after experience flying the Stits Playboy amateur-built aircraft. The RV-3 started out as an attempt to maintain the Playboy’s layout and concept but to improve it in every regard. The RV-3 was designed to have light handling, aerobatic capabilities, fast cruise speeds and short field STOL capabilities. The RV-3 was also designed from the start for serious travel and as such carries 30 US gallons of fuel giving it a range of about 600 statute miles. The design horsepower is 100-150 typically using a Lycoming O-235 or Lycoming O-320 powerplant, although some builders have fitted RV-3s with more powerful engines.
The RV-3 uses a NACA 23012 airfoil on a constant chord wing. Construction is semi-monocoque of predominantly 2024-T3 aluminum sheet. The wings are built around an aluminum I-beam spar with a lighter rear spar. The aircraft has plain flaps operated by a handle. The main landing gear is attached directly to the welded steel engine mount and consists of tapered, sprung steel tubes. Construction time for the RV-3 is reported to be 1300 hours for a first time builder.
The very first RV-3 built by VanGrunsven won “Best Aerodynamic Detailing” at the 1972 EAA Oshkosh Convention.
There is an RV-3A model, but its designation does not follow VanGrunsven’s normal system, where “A” models are nosewheel equipped versions. An RV-3A is an early RV-3 that has undergone rear spar and wing root upgrades as described in Van’s publication CN-1. Due to ongoing structural concerns the production of RV-3 kits was suspended in 1996. Continued customer demand for the single seat design resulted in VanGrunsven engineering a new wing for the RV-3. Production of kits was restarted a few years later. New aircraft completed since the wing redesign and aircraft that have been retrofitted with the new wing are referred to as an RV-3B.
By November 2014 281 RV-3s had been completed and were flying.

When Van put pencil to paper on his first airplane design, he coined the phrase “Total Performance” to describe his objective. He wasn’t trying to build the fastest airplane, nor one with the shortest takeoff roll, nor one that would win an unlimited aerobatics title. He wanted an airplane that was “very good” at as many things as possible, even if it wasn’t necessarily the absolute best in any single category.

He succeeded.
If you enjoy fun, responsive, seat-of-your-pants flying — and doing it solo — there is simply no better way to do it than in an RV-3.

The RV-3 is fast. It will easily top 200 miles per hour on 150 horsepower. Even on smaller engines it will cruise at three miles a minute. But speed is only part of the equation. The RV Grin starts with the takeoff roll and climb. It doesn’t take long to get airborne! The climb rate is exhilarating. In the air, the RV-3 is a joy. The controls are smooth, powerful, and almost perfectly harmonized. Sport aerobatics are delightful. Flying an airplane that handles this precisely and easily is a new experience for pilots used to flying production airplanes – and even to some used to flying fighters…

Landings are straight forward. Simple hinged flaps, an effective wing, and excellent low speed handling let the RV-3 land at almost any airport, and the rugged steel rod landing gear can handle a variety of surfaces; dirt, gravel, grass or pavement. Many RV-3 owners keep their airplanes on private strips at home…. some of them as short as 700 feet!

Despite the fact that it was designed as a sport airplane, the RV-3 has proven a capable cross-country traveler. The fuel capacity allows practical distances, the cockpit is big enough for pilots up to about 6′ 3″, and there is enough baggage space to carry a reasonable amount of “stuff.” The speed, climb rate and STOL performance all enhance the cross-country ability, too. Headwinds don’t hurt as much, there’s no more grinding around in circles trying to get high enough to get out of mountain valleys, and almost any flat spot can serve as an emergency landing strip. 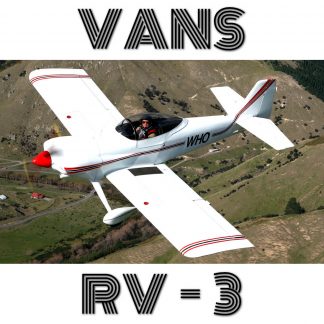