The single ultralight biplane “HORNET ART DECO BIPLAN” was developed in 2012. Classic aerodynamics and a memorable appearance.
Light but powerful propulsion contribute to an energetic and beautiful flight with significantly reduced direct operating costs. The small wingspan provides good storage possibilities both assembled and unassembled. The two-stroke two-cylinder engine guarantees a much lower weight of the power plant and the entire aircraft than comparable aircraft with classic aircraft engines.
An interesting design attracts all lovers of the classics. Another attractive feature is the low onboard and external noise level of the aircraft. Muffler, catalytic converter and the use of lead-free gasoline minimize environmental damage. The aircraft’s rescue system built into the fuselage provides additional safety in emergency situations.
The moderate ratio of the wing span in combination with the “harmless” profile and large vertical tail results in a biplane “HORNET ART DECO BIPLAN” easily coming out of a steady rotation in a corkscrew.
Pulling the handle, the plane can slowly stop in a direct horizontal flight. 75% max. Engine power and deceleration of 2 km / h per second, the plane achieves a fairly stable equilibrium at fairly high angle of attack and speed of about 48 km / h. In this state there is no loss of height. Control of the aircraft is carried out using the helm and aileron, as during normal flight.
At idle the engine equilibrium speed is about 50 km / h. Stick in max. pull the position. The plane makes small longitudinal vibrations. No tendency to fall wing. The descent rate is 2.5–3.5 m / s. Control of the aircraft is carried out using the helm and aileron, as during normal flight.
When the plane will dynamically stop, there is a moderate movement of the nose down, but there is no tendency to rotate. The aircraft is accelerating and recovering. Loss of height less than 60 meters.

Biplane “HORNET ART DECO BIPLAN” is specially designed for independent builders. The main building materials are stainless steel, aluminum pipes and birch plywood. Fiberglass / epoxy resin is used for the engine fairing, and decorative fairing. Airplane glider covered with cloth.
Stainless steel tubes are used for engine mounts, fuselage trusses, aircraft landing gear, aluminum tubes for control rods, wing frames.
Plywood made from the ribs of the wings and the floor in the cockpit.
The wing spar reinforcement, wing mounting and wing bracing, stabilizer mounting, elevator and rudder are made of stainless steel.
The chassis treads, the pilot cockpit gargrot are made of aluminum sheet / sheet material.

The aircraft is a classic mixed design. The fuselage farm, the aircraft empennage and the landing gear are welded from stainless steel thin-walled tubes. MIG or TIG welding method. Units are made of stainless steel with a thickness of 1.5 mm with local reinforcements of the same material. The skin of the fuselage is made of cloth on aluminum stringers. The stringers are attached to the fuselage truss using rivets or winding threads with glue.

The wing frame is assembled from aluminum pipes of the brand 6061-T6 or D-16t. the framework gathers on kerchiefs from the same material 1,5 mm thick. Pop rivets are used. Ribs made of plywood along the upper and lower contours are reinforced with slats with a groove under the rib wall. On the lower wings along the upper contour, plywood ladders are installed. Ailerons are assembled from aluminum sheet. Aileron ribs 0.5 mm thick. Aileron wall 0.8 mm. Wings wing fabric with firmware on the ribs. Stands of wings are assembled from al. pipes of oval section. Tips of wing posts are welded from stainless steel.

The power plant consists of a 2-stroke, 2-cylinder Rotax-503 / Rotax-582 engine, a gearbox and a silencer to reduce exhaust noise. The engine is driven by lead free gasoline. The carburetor air is filtered and routed through an air filter with an intake silencer.

A fully integrated ballistic rescue system consists of a parachute, which is packaged in a container located behind the pilot’s seat. A rocket with an electric or mechanical ignition pulls out the chute and saves the plane and the pilot.

Transportation and storage can be carried out in a closed or open car trailer with reliable fixation of the airframe elements. With detachable connections, the wings can be detached from the fuselage truss and folded along the fuselage into cradles. Foldable horizontal tail can be folded up when undocking the lower cable braces stabilizer and rudder heights. Everything takes about 30 minutes.

A package of drawings is available, consisting of 14 sheets of A1 and A0 format.
A number of them are full-scale, including full-size drawings of the ribs of the wing and reamers for cutting out of sheet metal.
All descriptions and manuals are in English (in metric units). There is also a list for replacing materials with their counterparts that are not part of the metric system.

The total assembly time of the aircraft will be about 500 hours. The cost of the material, not including the engine and rescue system, is estimated at about $ 3,000. 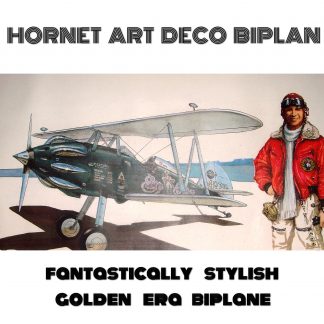